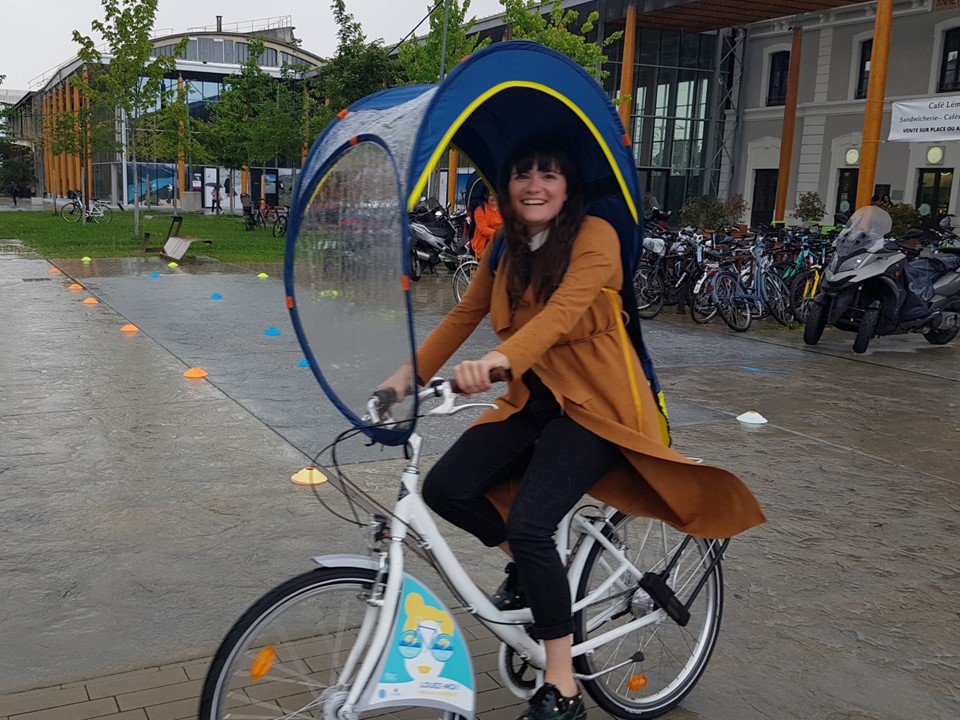 It is well known that the rain puts off more than one when it comes to going out on a bike and the studies carried out by various experts tend to demonstrate this.

In general, the rain leads to a reduction in the use of the bicycle and resulting in an increase in car traffic.

Although it is easily guessable that rain discourages cyclists from getting on their bike, whether it is to go to work or for a ride, the studies tell us a little more.

Indeed, it is not only the rain that causes cyclists to use their bikes less, there is also the wind.

A study made in Norway in 2019, entitled “How does the weather affect the shared bicycle usage?”, shows us for example, that the more the wind blows, the more cyclists will abandon their bikes to prefer walking.

What does rain change when you ride a bike?

Rain creates puddles and makes visibility more complicated, especially for those who wear glasses because water drops splash on glasses.

All of this can be dangerous if cyclists do not adapt their behavior to the rain.

The rules are just like in a car or any other vehicle and the bike is no exception, when it rains, you must :

The bicycle, a means of transport less used on rainy days

Rain has an effect on the usage of bicycle paths.

The idea of ​​riding in the rain, arriving at work soaked, not being able to see the road because of water drops on glasses and so on… does not appeal to our friends the cyclists very much. And this, despite the purchase of a rain poncho, a rain jacket, or any other rain protection while cycling.

Thus, on a typical rainy day, according to the How weather affects cycling study by Mean Median Mode Choice carried out in 2019 in Canada, for 4mm of rain, we observe a postponement or a certain renunciation of cycling:

However, the rain is not the only thing that puts off cyclists from taking their bikes.

According to the same study mentioned above, the temperature has an even greater influence than the rain.

Indeed, at a temperature of 5°C:

Knowing that rain and colder temperatures are linked, we can immediately see that there is a high abstention rate for cyclists during bad weather.

This is a real loss for cyclists, whether it is in time or money or even in leisure.

Yes, for many cyclists taking their bike is, before anything else, a pleasure!

In 2012, during a survey carried out by MTI Conseil and TNS Sofres, in request of the Club of Cycling Cities and Territories and the Ministry of Ecology, 58% of French people agreed that bad weather is the number one reason for giving up cycling on a daily basis.

They are even 68.9% who completely give up in case of rain or cold as far as occasional practitioners are concerned.

A more recent study by researchers from the University of Valencia (Spain) published in 2019, and which was carried out with more than 1000 regular bicycle users from 20 different countries, tells us that the factors “safety” and “weather ” (rain and cold) are equally the first two factors for giving up cycling.

In general, according to the study The impact of weather on bicycle risk exposure by Sylwia Pazdan conducted in 2020, almost all cyclists give up cycling from 5mm of rain, beyond that there is a drop equivalent to 1.5% for each additional 1mm of rain.

We can see that cyclists are unsurprisingly more vulnerable to changes in weather conditions than car drivers.

Whether it’s rain, snow, wind, sun, temperature… They all impact the use of the bike, positively or negatively. And here, the rain negatively impacts the number of cyclists using their bikes.

Fortunately, to counter this, there is equipment made and designed for cyclists.

How to be well equipped to counter the rain on a bike?

It is essential to have good rain gear.

But most fail to completely solve the problem faced by cyclists.

According to the independent site www.freewheelingfrance.com :

“[rain] Jackets do a good job of keeping us dry, until we start sweating from the heat that can’t escape”

This is what most cyclists think of the most popular bike rain protection.

But these are not the only solutions!

Roofs or hoods for bicycles are beginning to appear on our streets in rainy weather.

Cyclists who have opted for this solution are very easily spotted by motorized vehicles.

Bicycle roofs or rain canopy are a little more expensive than cycling waterproof poncho, waterproof cycling jackets, cycling rain capes… but they offer comfort, practicality and an unrivaled level of protection: no wet clothes or hair, protection against the wind, no fog on the glasses…

In addition, they protect the lower body and thus avoid buying rain pants or a rain suit.

Although, wearing rain gaiters or rain shoe protectors will nevertheless be recommended in case of heavy rain.

If you are interested in the bicycle roof solution, click here www.rainjoy.eu to find out about the Bub-up by Rainjoy.

Why should you invest in a good bike rain cover?

A bicycle is already an investment in itself which must prove to be worthwhile over time, especially for bike commuters (bike commute), that is to say those who use bicycles to get to their place of work.

But the rain often tends to make them prefer the car to the bicycle, which causes an additional expense each time it rains and therefore a lower profitability.

The continued rise in petrol prices only reinforces this observation.

Among the most motivated of the bike commuting community (journey by bike home – work), many end up giving up in the event of rain due to insufficiently efficient equipment.

Thus, the rain poncho or the rain jacket, despite their attractive price, do not 100% satisfy the needs of cyclists on their bike in rainy weather.

That’s why investing in good rain gear is essential.

It is better to invest in a good bike rain cover once, than to spend a little money to end up being disappointed and to return to the starting point… with less money!

To summarize, here are the best practices for cycling in the rain

1 – Check the weather the day before your outing

To be able to avoid accidents and respond quicker.

To avoid accidents and to be able to ensure your safety and that of others.

Inevitable to be able to fully enjoy your bike, even in bad weather.

For more information on how to prepare before cycling in the rain click on this link.

Bub-up®:The rain protection bubble for
bicycles that eliminates the need for rain gear.