The astonishing history of bicycle roofs and canopies 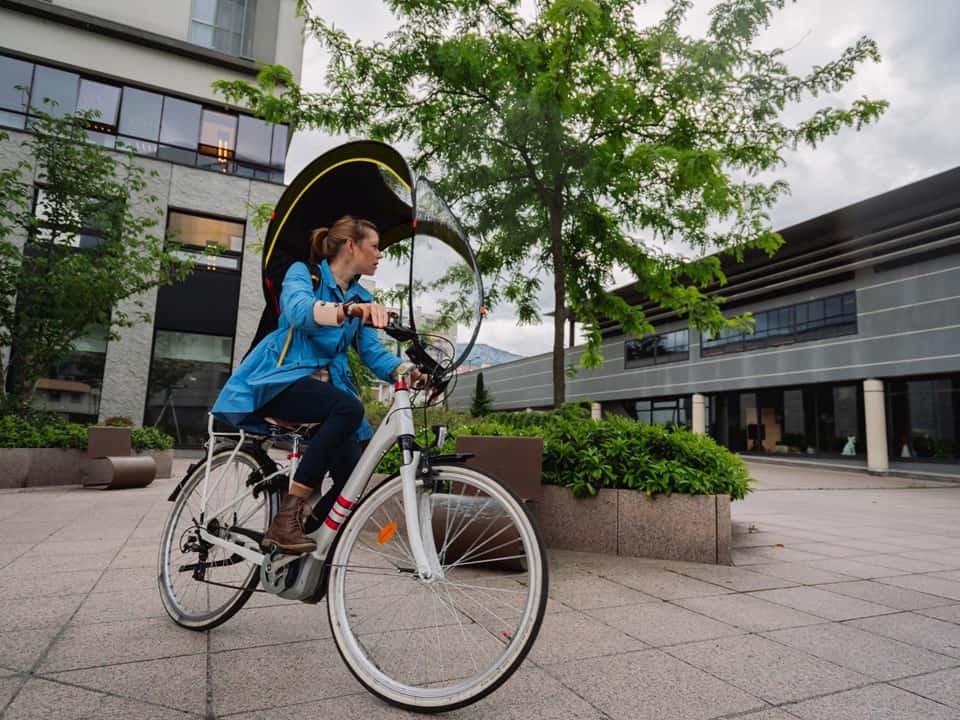 From the invention of the bicycle to the present day, inventors of all times and all ages have devised equipment to protect against rain when cycling.

They were sometimes a bit crazy, sometimes very ingenious, and they won’t all go down in the Cycling Hall of Fame.

However, each of them has contributed in their own way to cycling and making cycling easier regardless of the weather. We would like to honour all these budding inventors and Gyro Gearlooses of cycling!

The beginnings of bicycle roofs

In the second half of the 19th century, specific weather protection systems for these mobile machines were developed, such as umbrella attachments to the bicycle frame.

This is a filmed testimony of a sharp-minded and passionate inventor in the 1930s who presents his bicycle umbrella.

Later, in the 1940s, a patent for an articulated bicycle canopy was filed. The inventor specified in his patent that his product is intended to “make life easier for those who are forced to travel great distances every day to get to their jobs, regardless of the weather.”

This equipment was already intended to replace or complement rain jackets or rain gear. The ancestor of the cycling commuter was already on everyone’s minds!

Bicycles roofs to protect against the rain

In the 1960s, more imposing structures—in the form of rigid and necessarily heavy protective shells using the technical means available at the time—tended to improve this sought-after protection against bad weather.

Aerodynamics and wind resistance were probably not the first criteria for performance they were looking for, but rain guards were genuine roofs that already showed us how to ride a bike in the rain.

Some intriguing innovations can be found in the archives of the many patents filed on the subject. The technical diagram below may indeed be surprising as it looks like a modern solar panel is supplying the bicycle’s energy. It is however a bike roof that can be rolled out above the cyclist when it rains!

The end of the 20th century also had some surprises in store, like this rain gear that was designed for Tour de France riders.

But don’t be mistaken, its colour is by no means an indication that the cyclist is wearing the famous yellow jersey… Aerodynamically speaking, crossing the finish line first is quite doubtful!

Bub-up® by Rainjoy: The joy of staying dry while biking in the rain

Having said all this, it would be easy for us to present our Bub-up® as the most successful product.

We’d prefer being a bit more modest and say that it’s certainly the easiest and most ergonomic product on the market.

Unlike other existing bicycle tops or canopies, the Bub-up® fits like a backpack and two hook-and-loop fasteners fit onto any bicycle handlebar. The result is extremely simple to install and comfortable to use.

Transport is just as simple: The Bub-up® can be quickly folded into its 40-cm integrated storage bag and can be carried on a rack or over the shoulder.

Leave your poncho or rain cape in the closet; The Bub-up® is now your ultimate protection when cycling in the rain!

Bub-up®:The rain protection bubble for
bicycles that eliminates the need for rain gear.